I’m going to start a weekly list of my favourite three things which I have had, seen or done this week, number one being the best! 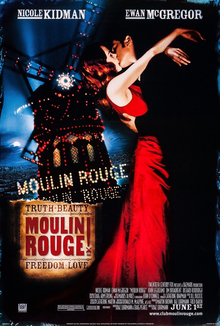 Moulin Rouge! I had always wanted to watch this film but never felt the impulse to go and make a special trip to the shops to find it. When I saw it was going to be on T.V last night, I jumped at the chance to watch it. It started off very strange and I did toy with the idea of flicking over to another channel because I realized that it might be one of those unusual arty films that tries too hard to be different. I do this too many times though so I decided to percevere with this one. I had heard good things about it and it is just one of those classic films which you have to see. Anyway, after some perseverance and giving it a chance to make sense in my brain, it may well be my favourite film at the moment and I absolutely do feel the impulse to go and buy it from the shops to watch it all over again! The story line is beautiful and although the film is done in an unusual style, you get used to it as you watch on and just get drawn in by the intense drama and delicate voices of Nicole Kidman and Ewen McGregor. A very sad ending, but you see it coming so it’s not such a shock, still quite a tear jerker for me though…

This coffee. Earlier on in the week I took a trip into Lincoln’s old town (Bailgate) and came across a beautiful independent tea and coffee shop. The smell as you walked through the door was divine, coffee must be one of my favourite smells in the world, and nothing beats freshly ground! There were jars and jars of coffee beans, all collected from different parts of the world- Jamaica, Cuba, Ethiopia, Madagascar, Brazil etc…but I chose a Costa Rican bean. This is my favourite…I think, I haven’t really tried many, but Costa Rican coffee brings back special memories for me. I once went backpacking in the mountains of Costa Rica where my friends and I came across a local coffee farmer who collected and sold coffee beans. We first tried some of it in his tree house cafe on the peak of a small hill and it was the most delicious thing I had ever tasted. This could have been down to the level of tiredness and thirst I had reached, but nevertheless, this is a memory I will never forget and one which can always be brought back with a cup of the fantastic Costa Rican coffee. Fresh strawberries! With the sunshine being as strong as it has been this week there is nothing more I am craving at the moment than strawberries. This week my brother and I visited a “pick your own” strawberry farm which, yeah, made me feel about eight years old again, but come on, will the joy of picking your own fresh strawberries ever dwindle? I hadn’t done this in so long and it was even better because the idea was completely spontaneous! We took the strawberries home and saved the best to be eaten raw and made a strawberry sauce topped Greek yoghurt cheesecake with the rest. It was delicious and much healthier version of the indulgent, classic dessert.